July is a month of plenty on the farm and our summer crops are in full swing. We are harvesting courgettes, cucumbers, tomatoes, aubergines and beans alongside summer pointed cabbages, kales, chards, spring onions, salads, carrots, beetroot and potatoes. We are particularly enjoying new potatoes, roasted with a lemony dressing, crunchy cucumbers, and the first tomatoes on toast with garlic and olive oil! It's one of the best times of year for seasonal eating so enjoy it while you can!

Read on for information and ideas about how to use kohl rabi, one of our lesser known vegetables, as well as recipes with broad beans and cucumbers. We also have an update from the farm and details of how you can buy our produce through Exeter's new online Farmer's Market.

As well as plenty of harvesting, we have also been prepping for the winter months. Last week we planted 14,000 kale, 18,000 purple sprouting broccoli and 11,000 cauliflowers. We also drilled over 2 acres of chard. This will be ready to fill our veg boxes and farmers market stall in the winter. With most of the planting and drilling now done, our focus is on weeding and caring for the crops that are now in the ground. Our tractor driver Mike does much of the weeding using a tractor mounted weeder - a cage weeder or a finger weeder depending on the size of the weeds. He runs through the crops regularly - two or three times while the crops are small to knock out as much of the weeds as possible. Our team then hoe in between the plants to catch the weeds that the tractor can't reach.

It's been pretty good growing weather with sunshine and showers continuing through July. This regular rainfall means that we haven't had to irrigate the crops as we have done for the past couple of years saving lots of time and hassle! 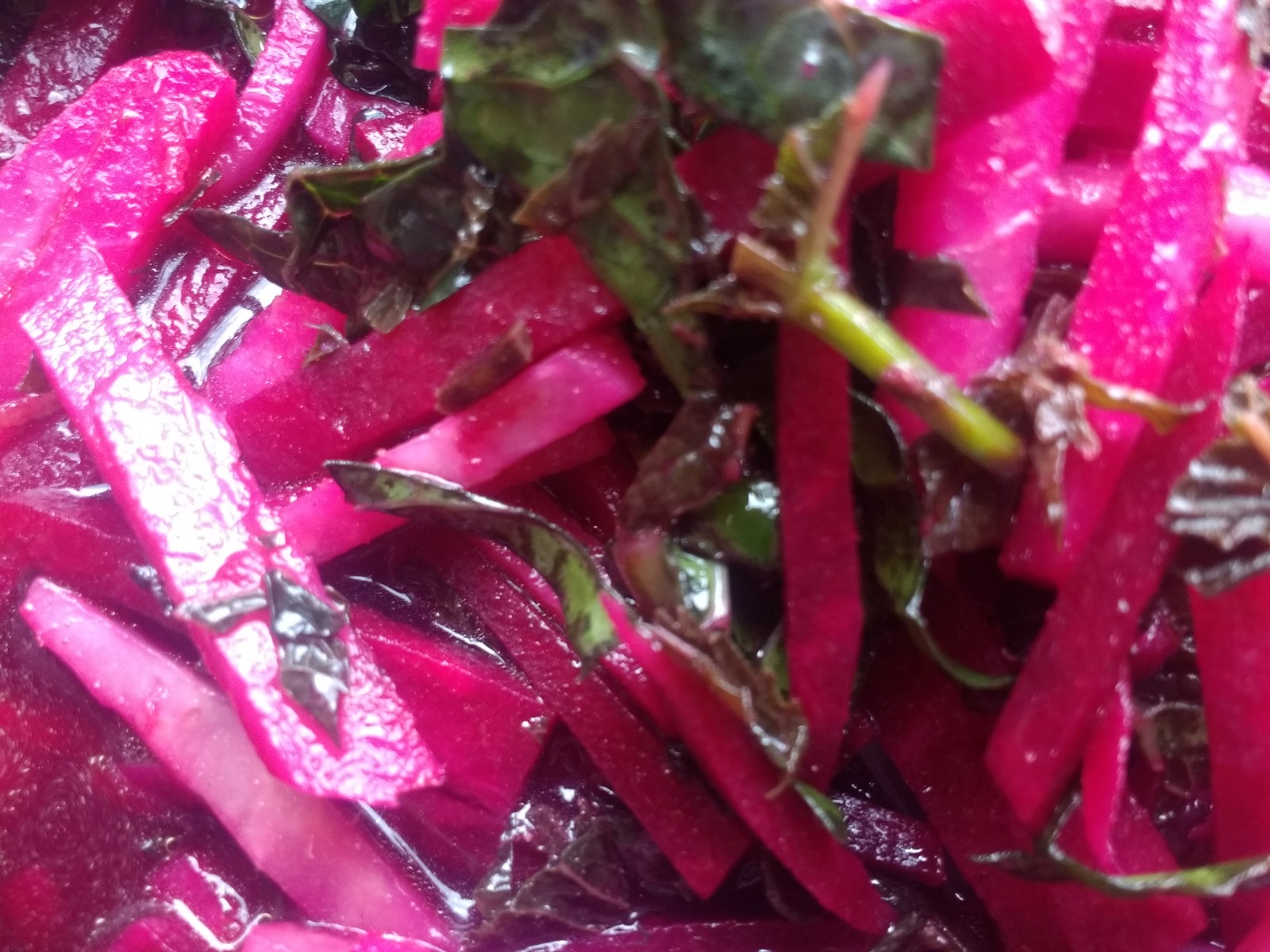 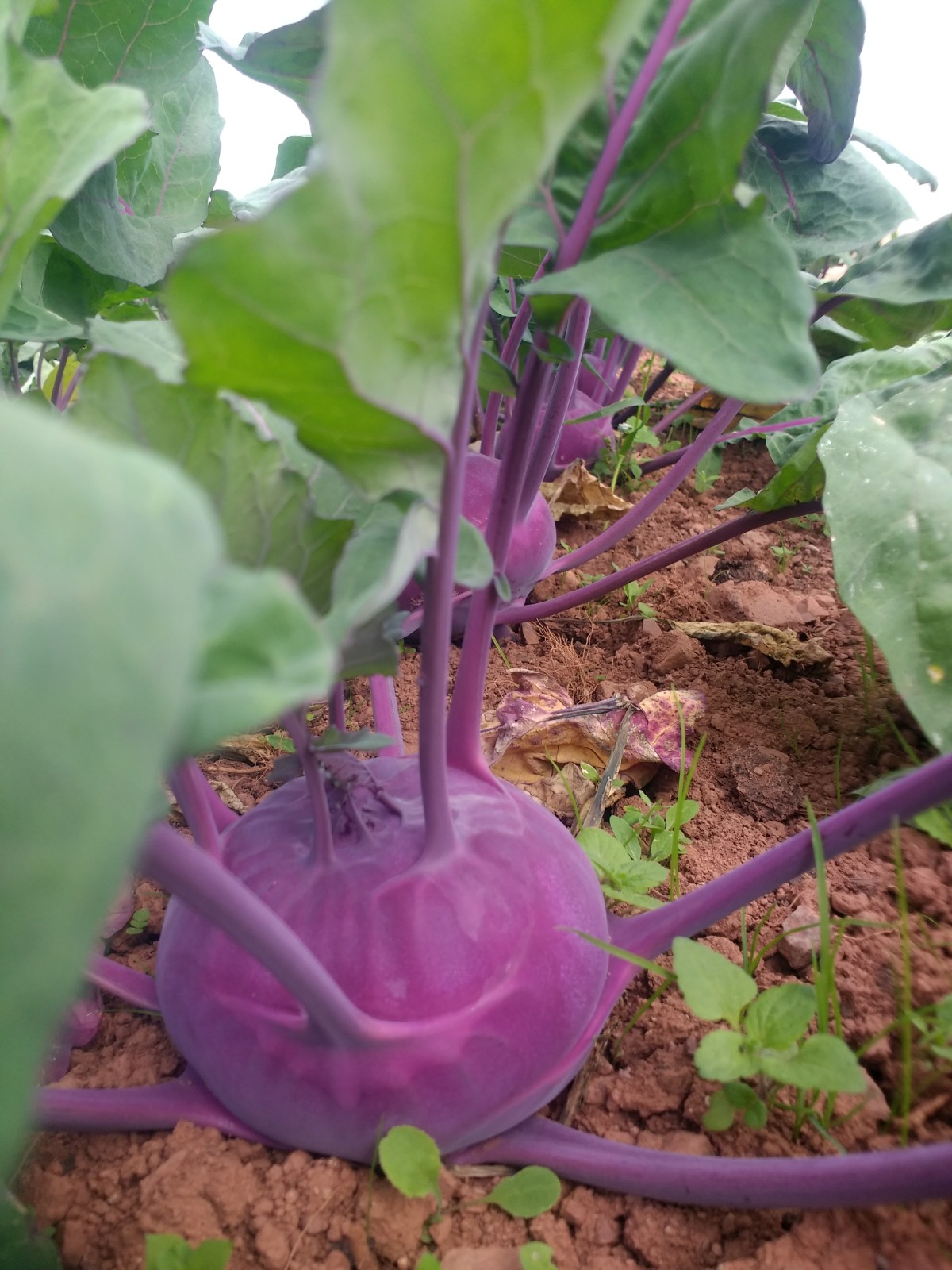 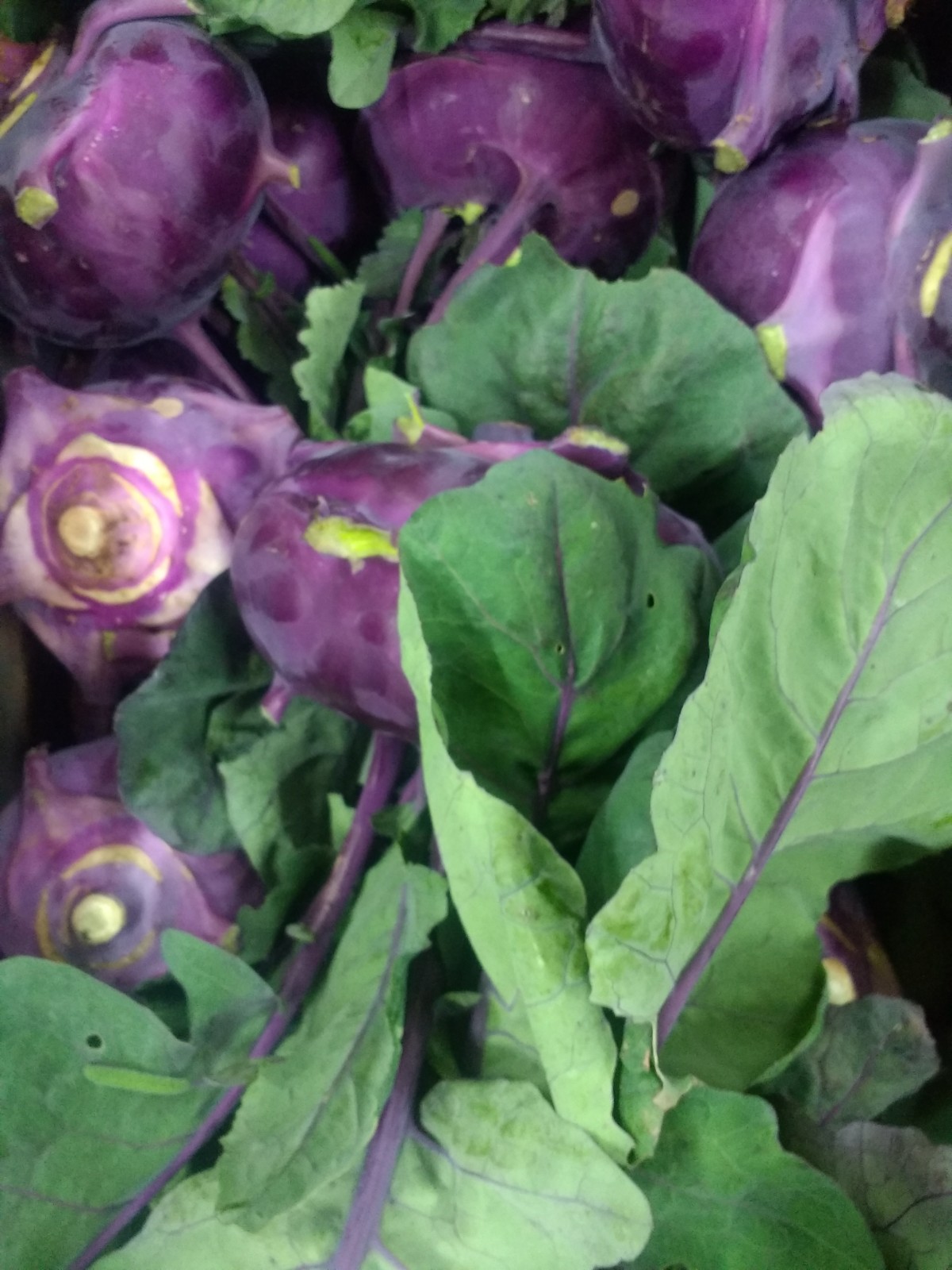 Occasionally at this time of year you’ll receive Kohlrabi in your veg box and it’s also available on the online shop. It’s name translates from German as Cabbage Turnip and is a member of the Brassica Oleracea species alongside kale and brussel sprouts amongst others. All originally bred from Wild Cabbage kohlrabi was bred selectively for its swollen stem, the part that is generally eaten. It’s a weird and wonderful looking thing, with a strange name which can leave you feeling at odds as to what to do with it.

However it's a tasty, versatile vegetable and is relatively quick and easy to grow. We do one early sowing at the end of February and then from mid April it’s every 2 weeks till the end of May for a steady supply. As with all brassicas they are quick to germinate and are ready to plant out after 4 to 6 weeks. We grow a lovely purple variety called Azur Star which is suited to early production. Fleeced at first to protect from frost and also to protect from pests such as pigeons and rabbits the crop should be ready to harvest within 6 to 8 weeks. These timings all depend on the time of year and the time from sowing to harvest is quicker as the year progresses. We aim to start harvesting from June onwards, timing is crucial as you want to get them before the crop bolts and they start to go tough and woody. The bulbs should still be relatively squat looking, when these start to elongate it's getting too late. Crunchy and refreshing it can be eaten raw and has a mild, slightly sweet brassica taste.

The skin is tough and so should always be removed before eating. Try grating or chopping into matchsticks and adding to a slaw alongside beetroot and kale, mixed with oil, lemon juice, a little sugar, cider vinegar and herbs such as parsley, coriander and mint. It’s also great to cook. Cube it up and roast it with other vegetables such as lovely, sweet new season beetroot. Roast it or steam it and add it to a risotto. It also works well in curries…...the list goes on. I personally just like peeling it, slicing off chunks and eating it raw. Although it is generally the bulbous stem part of the plant that is eaten the leaves are edible too. Young leaves can be used in salads, mature leaves cooked as you would any other greens.

This year hasn't been the best for broad beans as they struggled during the dry conditions we had during May and June and succumbed to an aphid attack which we wrote about in our last newsletter. So we recommend enjoying them while you can. Some of our box scheme customers will have found broad beans in their boxes last week and they're also available at the Farmer's Market. Try this simple and delicious pasta recipe: 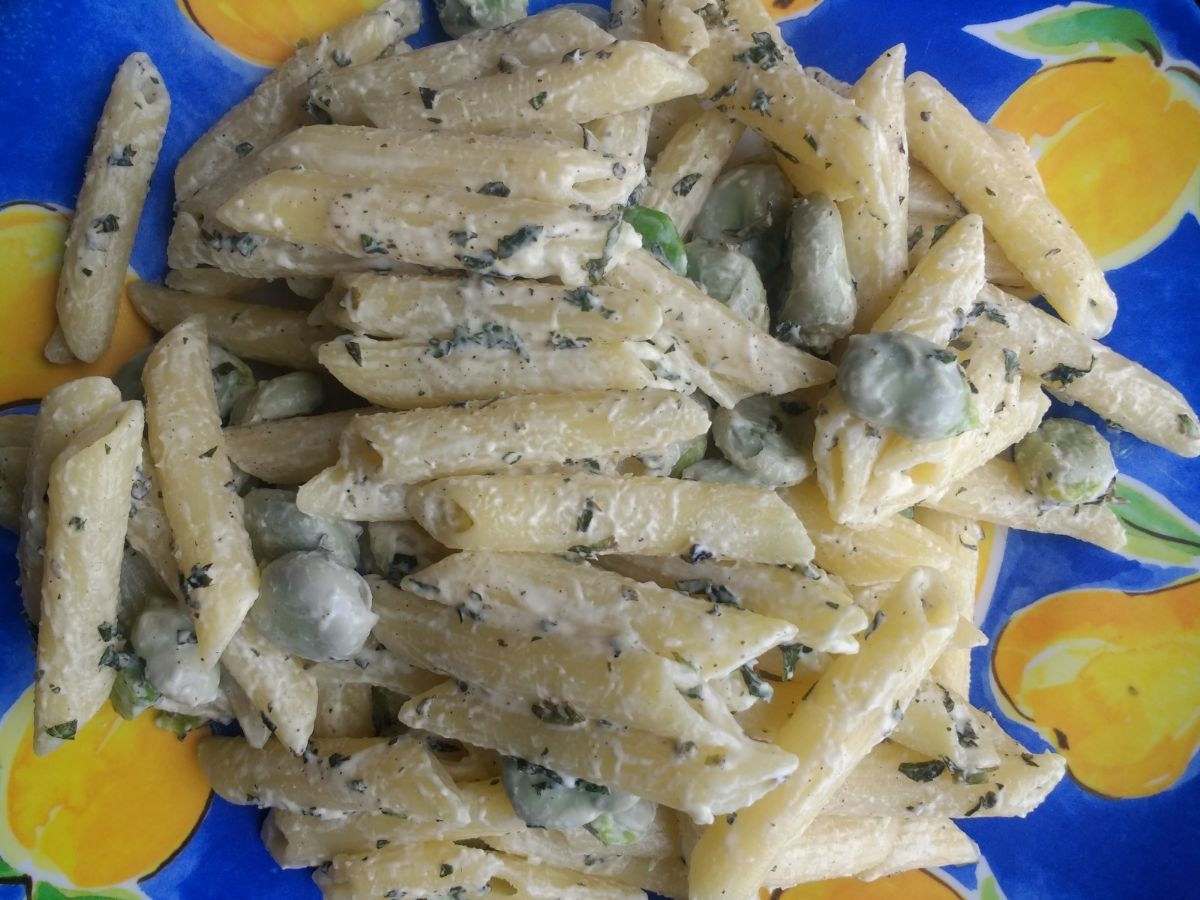 Method
1) Pod the broad beans and then blanch them in boiling water for a few minutes until tender.
2) In a large pan, heat the butter or oil and garlic. If garlic begins to brown, turn down the heat.
3) Pour in the creme fraiche, roughly chopped mint and broad beans. Reduce the heat and simmer for a few minutes.
4) Add grated Parmesan, salt and pepper to taste. The sauce is best served with tagliatelle or penne. 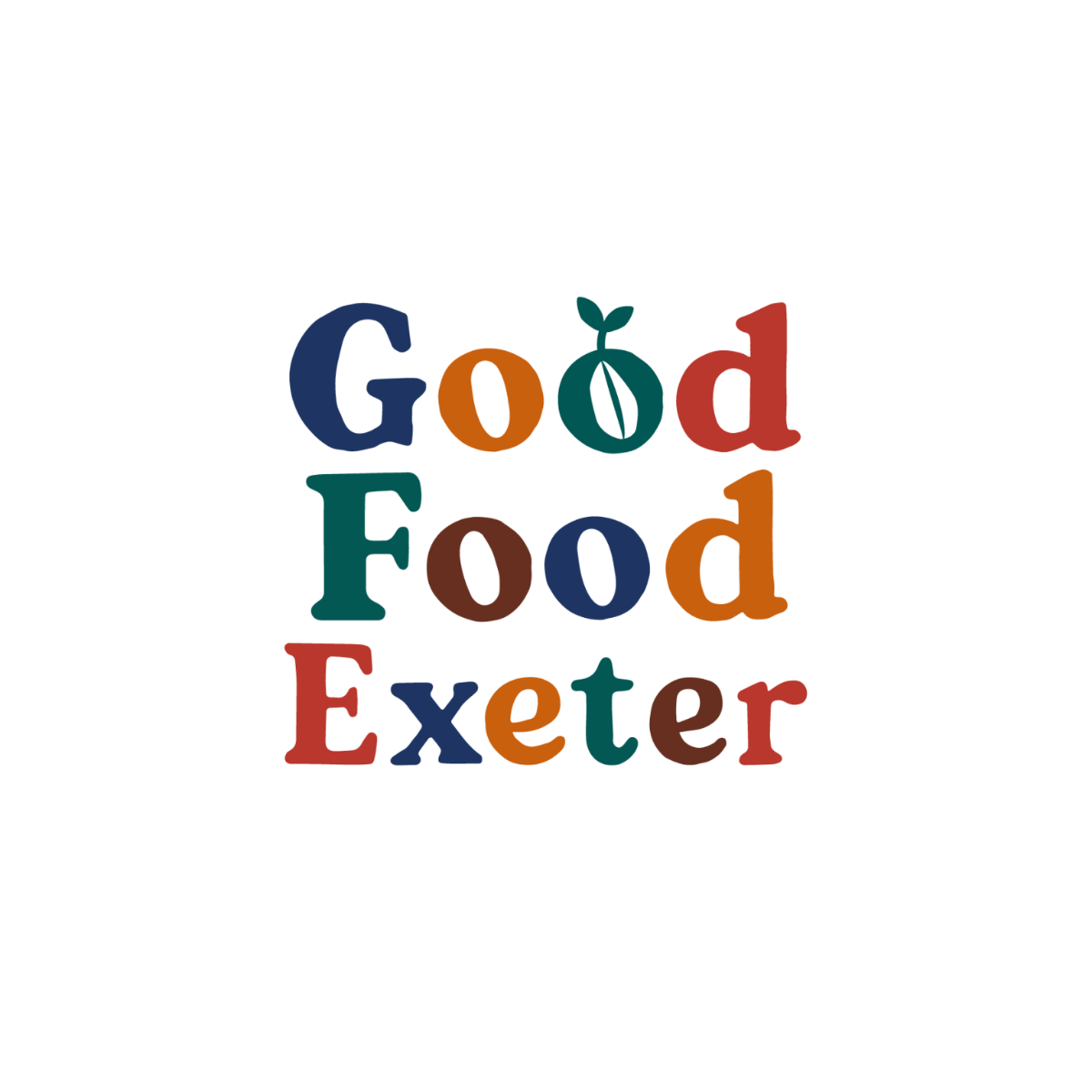 You can now buy our produce through Good Food Exeter - Exeter's new online farmer's market. Click the link to visit their online shop where you can place an order between Tuesday and Saturday each week, for collection the following Tuesday, at either:
- America Hall, Pinhoe (between 3.30 and 5.30 pm)
- St Sidwell's Community Centre (between 4 and 6pm)
There are loads of other delicious products listed from local producers who all share a common ethos of environmental sustainability. There's a wide range available, including: meat and dairy; bread and cakes; store cupboard essentials; jams and other preserves; and much more!

Cucumbers are a go-go here at the farm - you'll be receiving them in your veg boxes and we'll have plenty available at the Farmer's Market too. This recipe is great for using an abundance of cucumbers, and so tasty. It isn't a true preserve but will store well in the fridge for a couple of weeks in a sealed container. Thank you River Cottage for the recipe and Erin for the inspiration. 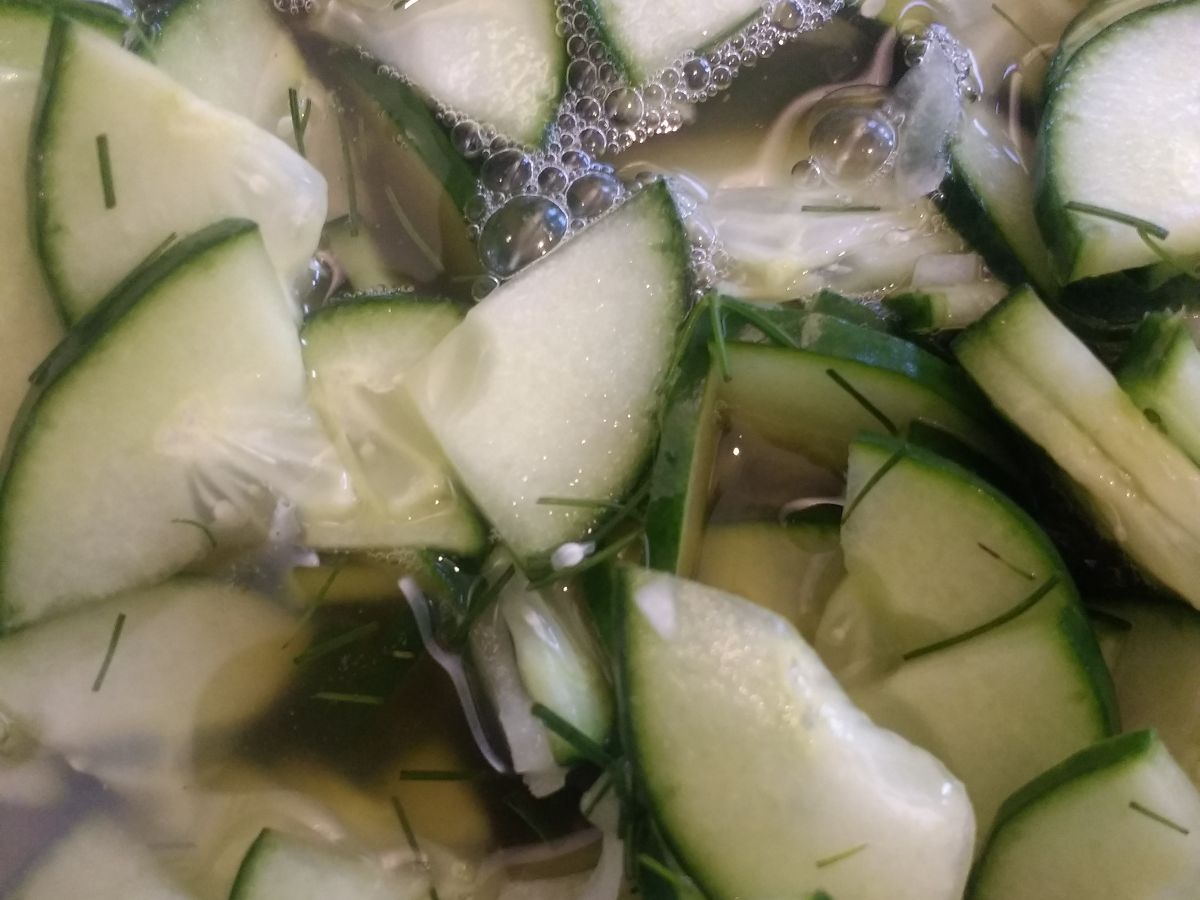 Use the slicing blade of a food processor to a sharp knife to finely slice the cucumbers. Peel the onions and slice very thinly too. Combine cucumber, onion and dill in a large bowl.

Mix the sugar salt and vinegar and pour over the cucumber and onion. Leave overnight for the sweet and sour flavours to mix. Put into jars or a sealable container. Stores for up to 2 weeks in the fridge.