2016 Overview and Other News

The year ends on a very calm and settled note, as indeed most of the year has been (weather-wise that is!)

A year ago, it rained every day from November till the end of January.  However, concerns about the longer-term impact of this were soon allayed.  A cool late March and April meant the early crops were slow, if they survived, but May and June were fantastic and there was enough moisture to establish all the crops into July.

We had a slight concern with Diamond back moth invasion in July, but they seemed to disappear without too much collateral damage. The dry July and August were a worry at the time, but we had just enough rain and lots of wonderful sun to keep the crops growing.  September, October and even November were perfect growing months, we even had calabrese into December and now the purple sprouting broccoli, caulis, sprouts, kales, chards, etc. are doing brilliantly.

It is probably tempting fate but I would go as far as to say that 2016 has been the best ‘growing’ year we have had. Almost all the crops have done well and I put this down to 3 reasons:

Being an organic farmer, I am bound to articulate the wonders of ‘soil’! And although soil is analysed from the physical, chemical and biological perspective, it is only recently that the ‘biology’ is being fully understood and used beneficially.  By growing green manures, having a growing crop whenever possible and using good compost we are constantly improving our soil organic content and biology.

Reflection With all the political storms and conflict in the world it makes one reflect on one’s own course of action.

We just happen to be lucky enough to have wonderful soil on south facing slopes right on the edge of Exeter. There is a simplicity to growing vegetables, salad, herbs and fruit and supplying them to a very local area.

In contrast, there seems to be a certain lack of logic to transporting vegetables and salad which are very bulky for long distances.

In organic systems, there is no need for artificial nitrogen, potash and phosphate, on which non -organic systems are dependant.  When the correct biology and organic matter is in the soil, the plants can find an abundance of these essential growing nutrients.  In fact, in a healthy soil, yields of most vegetables are as high in organic systems as artificial fertiliser systems.  (The exception being potatoes and with arable crops wheat yields are far lower.)

There does appear to be a momentum of change: The 2016 Organic Market Report revealed a steady growth of 4.9% in 2015. This is the third year of consecutive growth for the UK organic sector, ref: Soil Association.

At the end of the day it is powerful to make a ‘stand’ for what we believe in.

Partners It is good to be members of the Soil Association and hence to be part of the Organic movement and The Land Workers Alliance, which promotes smaller producers and the Local Food agenda.  It is also great to work in partnership with the Real Food Store, Love Local Food and West Town Farm towards similar aims.

I also want to mention the growing social media movement for vegetarian/organic cooking http://annajones.co.uk , https://deliciouslyella.com  as well as our own Exeter based http://tarasbusykitchen.com/  all are promoting fantastic recipes.

Highlights of the year There have been several, including:

Exeter Food Network is an umbrella to all the food, working groups in Exeter.  There is some wonderful work being done:

Well not at present but it is possible.  The report below was produced for the city of Oxford and much of this would apply to Exeter as a similar sized city.

‘’Food printing Oxford’ - How to feed a City,’ which can be downloaded for free from this website

some conclusions taken from the report

Personally, I feel it is a great report.  However, the opportunity provided by eating seasonally are missed and the ‘footprint’ of food on our Ecology is not considered at all. 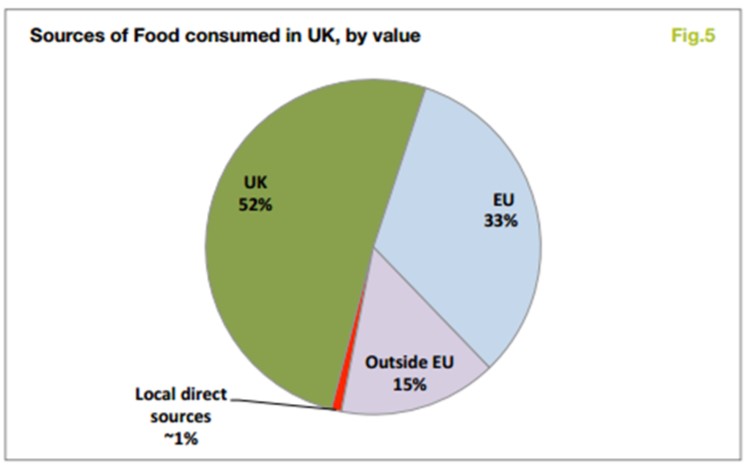 The growth of Soya Bean production and its destruction on ecosystems continues unabated.

December 2016 the United States Department of Agriculture (USDA) estimates that the Global Soybean Production 2016/2017 will be 338 million metric tons.

‘Last year the Global Soybean Production was 313.31 million tons. This year's estimated 338 million tons could represent an increase of 24.7 million tons or a 7.88% in soybean production around the globe.’

338 M metric tonnes relates to about 120 million hectares.  The area of France and Spain and Portugal is 124 million Hectares.

According to www.soyatech.com: “About 85% of the world's soybean crop is processed into meal and vegetable oil, and virtually all of that meal is used in animal feed. 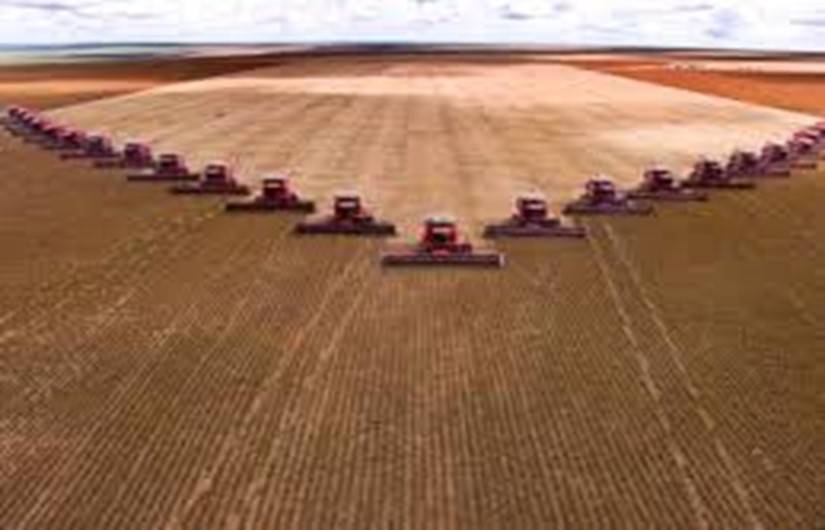 In any discussion about meat, it is important not to put all meat production in the same category, for example pasture fed livestock www.pastureforlife.org/ is a totally different system of production c.f. intensive chicken or pigs or beef feedlots.

Future politics I will only bring up the word ‘Brexit’ in the context that an unforeseen consequence is that the rationale behind farm subsidies has been completely thrown in the air, as at present they are enabled though the EU and after 2020 any funding will come direct from the UK government.

This is seen as a great opportunity for many who promote more sustainable farming systems e.g. the Soil Association, Sustain and wildlife organisations, e.g. the RSPB, WWF, the Wildlife Trust and National Trust.  However, it is going to take huge pressure to dislodge some of the present powerful, vested interests.

I have a very simplistic view on subsidies: get rid of Pillar 1 payments and transfer as much of the money as politically acceptable to Pillar 2.

Pillar 1 payments are a generic payment to all farmers on an area basis (this year £206 /ha.) the payment goes to the person farming the land, but in reality, if land is rented the rent increases.

It is worth noting that many farmers make a profit of less than their pillar 1 payment.

At present pillar 1 payments are not capped, which has to be named as one of the great injustices of our time.  http://energydesk.greenpeace.org/2016/09/29/common-agricultural-policy-millions-eu-subsidies-go-richest-landowners/

We are so lucky on this farm to have great soil, on south facing slopes so near to Exeter.  It seems the obvious thing to do to grow vegetables and leafy green crops and fruit and supply them locally and fresh.

One thing I am very conscious of (having read the report above) is that we do discard (compost or feed to our chickens or pigs) too much produce and we need to action finding more outlets for these ‘seconds.’

Reducing costs. The cost of production is higher in organic systems because the time spent weeding is far greater than applying an herbicide.  However, if we can make the growing systems efficient and harvesting, packing and the delivery to market simple then our costs can be reduced.  E.g. We have moved to mostly delivering early in the morning or evenings to reduce delays from traffic.

The issue we are always up against is that in a globalised food market, producers who have a surplus will often dump their produce onto the market, bringing the price of commodities below the cost of production.

Our aim is to make fresh, organic vegetables, salad and fruit available to many people in the Exeter area and to enable more people to grow their own.

If there was an increase in the amount of ‘local food’ sold from 1% to 2% that would be a step.

If there is a competitive local food market, producers like ourselves will become more efficient.  However there desperately needs to be some structures put in place in Exeter to facilitate the change.  We need more outlets, which are designed to be simple for local producers to unload and stack the shelves and consumers to come and access.  We need a Farmers market twice a week, including a Saturday.  Then the price of local and organic food will come down as well as enabling producers to pay decent wages.  We will have a more sustainable food system, with more local employment, a better economy, healthier diet and improved biodiversity created by small scale, mixed farming systems. Ref 1

Exeter could so easily follow the example of cities like Bristol and towns like Totnes and Ashburton and even South Molton, which has a market twice a week.

A lot of us were moved by the Queen’s Christmas message and the theme of communities and inspiration.  We are lucky enough to have this land here and a fun way to bring people together is sharing growing and food preparation and of course eating.  We will extend our ‘activity’ days of free, fun filled, family events with fabulous food!  We really look forward to meeting as many people as possible at these and other events, as well as at the Exeter Farmer’s Market or delivering to your house.

Wishing you a happy and healthy New Year.  Martyn